Often times when material is dispersed it tends to clump together, better known as agglomerate. These agglomerations can cause many issues in variety of industries whether that be for coatings or API suspensions. Fibrous and layered materials also need to be separated to truly utilize their superior properties.

Let us use our collective 90 years of applications development and machine engineering experience to help drive your product to market as quickly as possible.

How we can help

The Microfluidizer® processor is great at using constant high pressure with reproducible high shear forces to break up agglomerates, to di-fibrillate cellulose nanofibers, exfoliate graphite, where they can be well dispersed and suspended. Microfluidizer® technology has proven to achieve finely dispersed product.

Microfluidizer® processors are designed to be simple to use and clean with the option of conforming to cGMP requirements.

Whether your application requires deagglomeration, dispersion, delamination, exfoliation or defibrillation and etc., Microfluidizer® processors provide an efficient solution for it.

Microfluidizer® technology has been extensively used to process both of the 2D and 3D allotropes of carbon and other types nanomaterials.

Two-dimensional (2D) topological materials are currently attracting rapid growing research interests due to their unique properties. The new “wonder” material, graphene, is the mostly studied and opened up huge application potentials. Microfluidizer® technology has been successfully used to produce few layer graphene (FLG) through liquid exfoliation of graphite. In a recent article published by Cambridge Graphene Center, the uniform high shear generated by the Microfluidizer® processor achieved 100% exfoliation yield with much higher concentrations. The produced FLG was subsequently formulated as highly conductive printable inks. The entire process was water based without using harsh chemicals which makes it more environmental friendly.

The example of processing 3D carbon nanomaterials is de-agglomeration and dispersion of carbon nanotubes (CNTs). Many studies have been performed using Microfluidizer® homogenizing processor for dispersing either single-walled nanotubes (SWNTs) or multi-walled nanotubes (MWNTs). Our processor can successfully disperse and create stable suspensions of SWNTs and/or MWNTs in various liquid media including polymer resins, organic solvents or simply water. The nanotubes are largely de-agglomerated and dispersed uniformly — in a single pass. During additional passes, length reduction can be controlled based on processing conditions. The dispersion can enhance electrical conductivity as well.

Microfluidizer® technology has been widely studied for the de-fibrillation of cellulose. The results prove that wood cellulose and non-wood fiber samples can be successfully de-fibrillated under several processing conditions. In a recent published study, cellulose nanofibrils (CNFs) were prepared by using a Microfluidizer® processor to disintegrate aqueous pulp dispersion. The produced CNFs were then mixed with nanoclay disperions to obtain composite dispersions. The steady-shear and viscoelastic properties were evaluated and found to be affected by CNF content and interactions between CNFs and clay particles. Read more about this story 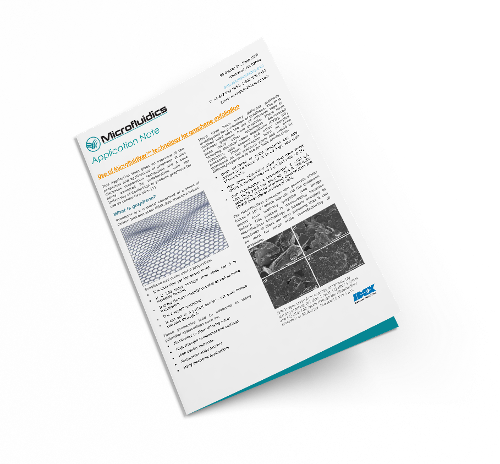 Use of Microfluidizer™ technology for graphene exfoliation: This Application Note gives an overview of the properties and applications of graphene.