Nanoemulsions are two or more immiscible liquids (normally consisting of an oil and an aqueous phase) where one is finely dispersed in the other forming nano scale droplets.

Find out how we help manufacturers achieve stable nanoemulsions

Your Challenges How we can help Our Experience Our Approach 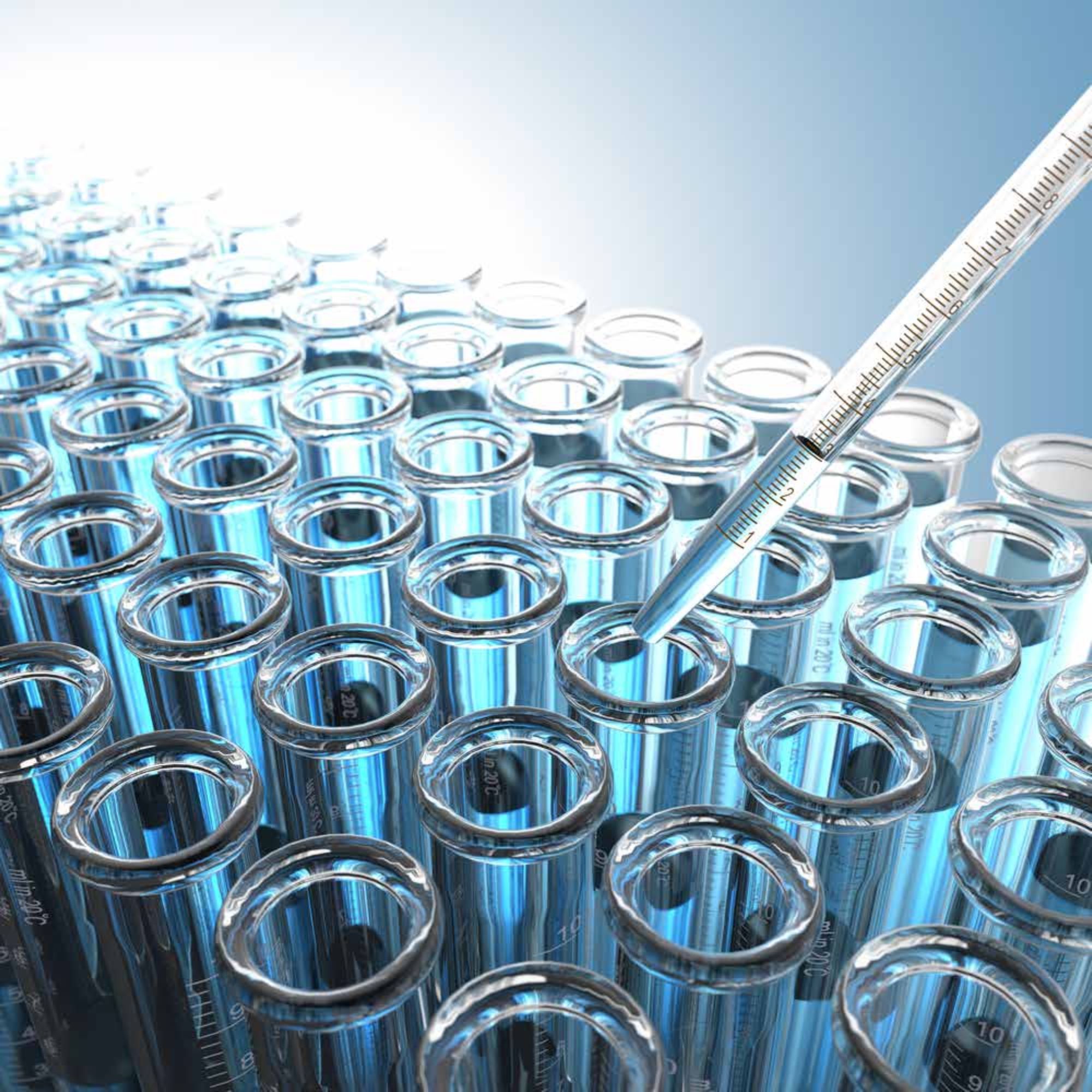 Stable, small uniform particle sizes with tight distributions is crucial for sterile filtration, increasing bioavailability and stability for pharmaceutical industry. This is vital in producing successful Vaccine Adjuvants which can be used in the fight against seasonal flu and pandemic influenza.

How We Can Help

Microfluidics® technology delivers not just the highest shear forces, but also applies it uniformly to ensure that every mL of material undergoes the same high shear rates, no matter whether it is 1mL at a time or many liters per minute, to achieve nanoemulsions with tight particle size distribution.

Let us use our collective 90 years of applications development and machine engineering experience to help drive your product to market as quickly as possible.

Microfluidizer® processors are designed to be simple to use and clean with the option of conforming to cGMP requirements.

Request a free no obligation consultation. Let us help you solve your nanoemsulsions challenges.

Microfluidizer® technology is critical for any nanoemulsion application that requires precise control of the particle size.

There are many proven nanoemulsion applications in a variety of industry sectors including: pharmacuetical/vaccine, cosmetic/personal care, food/nutraceutical, and chemical/industrial sectors.

Microfluidizer® technology has been proven to be ideal for creating nanoemulsions not least because it can increase emulsion stability and facilitate efficient sterile filtration.

Additionally, samples as small as 2 mL can be processed with an assurance that this can be scaled up to hundreds of liters per hour on the production scale machines with the same results due to the fixed geometry Interaction ChambersTM found on each model.

The following are just some of the examples of common nanoemulsions produced using Microfluidizer® processors:

Vaccine Adjuvants: Some of the most effective vaccine adjuvants are nanoemulsions incorporating squalene, notably MF59 (produced by Seqirus) and AS03 (produced by GSK). Microfluidics has been collaborating on vaccine adjuvant research with the Infectious Disease Research Institute (IDRI) and have proved the repeated achievement of particle target sizes enabling sterile filtration of the nanoemulsions.

Here’s an example of particle size distributions that were achieved using the Microfluidizer® technology first developed on the lab-scale M110EH, and then scaled up to the production scale M7250. 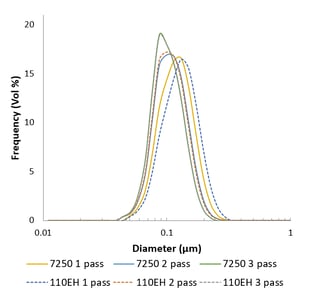 Propofol: As an intravenous (IV) sedative-hypnotic that is used in ICU departments in hospitals for sedation of intubated, mechanically ventilated patients, Propofol is proving vital in the fight against COVID-19.

Microfluidics® Processors are successfully being used to manufacture propofol. After just 2 passes at 20,000 psi the propofol liquid reaches the target particle size with a tight particle size distribution. 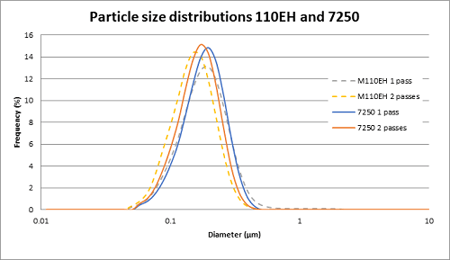 Both drug delivery and vaccine nanoemulsions must be sterilized. Different strategies are available and include autoclave and gamma irradiation. But sterile filtration is one of the least expensive and most gentle sterilization methods available.

In order to pass nanoemulsions through sterilizing filters without losing product or clogging the filters, it is really important to have very narrow particle size distributions with virtually all of the particles less than 200 nm.

This phenomenon was first detailed by biotechnology company CORIXA.  They found that in the sterilizing process they were losing a considerable amount of material of their nanoemulsion that was produced on a homogenizer.

The solution was validated in collaboration with Pall Life Sciences. Pall had approached Microfluidics to understand why nanoemulsions produced with Microfluidizer® technology resulted in more robust sterile filtration processes.

Pall then used their sterile grade filters to investigate the throughput rates in relation to the particle size distributions.

The samples filtered were then analyzed to verify that all the bacteria had been removed.

There are many benefits to producing nanoemulsions with small average size and narrow particle size distributions.

Instability and phase separation of emulsions and suspensions are common challenges.

Research and production teams find it problematic creating nanoemulsions that are stable.  This is because most technologies cannot produce the particle size distribution necessary to reach the product goals.

To overcome these issues Microfluidizer® Processors use a unique fixed-geometry Interaction ChamberTM to reduce particle sizes uniformly and to a level unmatched by other methods.

This enables customers to not only optimize formulations and achieve stability, but to also enjoy the cost efficiencies offered by products with a prolonged shelf life.

These stable emulsions achieved with the Microfluidics equipment mean that it is possible to create a translucent appearance for cannabis, food or cosmetic products.

Microfluidizer® high shear fluid processors are frequently compared to conventional homogenizers because they are used in similar applications.  However, the results achieved can be dramatically different.

The difference lies in the Interaction ChamberTM and pumping system which provides a uniform high shear environment for the product stream during processing.  This ensures repeatable results with particle sizes on target with tight particle size distributions.  The process is also reliably scalable.

By contrast homogenizers use variable-geometry valves as the shear mechanism alongside a constant volume pumping system which does not precisely control the processing environment. Product is thereby exposed to significantly more variations in shear which results in larger average particle sizes, a wider distribution and scaleup challenges.

Below is a comparison of a nanoemulsion that was processed on a Microfluidizer® Processor compared to a High Pressure Homogenizer.  All the samples were processed at 30,000 psi. 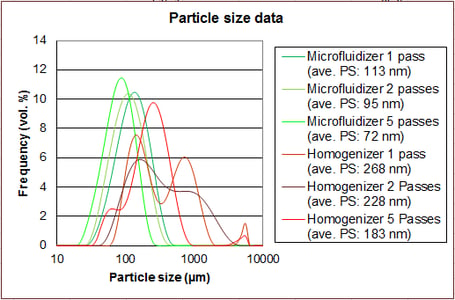 Microfluidizer® technology is easily scalable from lab to pilot scale and on to full production scale manufacturing.

This is achieved by the fact that the same Interaction ChambersTM are used on all units - resulting in consistent quality and scalability.

The microchannels are placed in parallel on the production equipment - ensuring the same processing methods on both lab and production machines.

Arrange a call back

Do you need support?

Let our team of experts guide you through your options.
Resources & Guides