Creating the right manufacturing process that enables downstream processes to be more effective & ensuring the final product meets target physiochemical properties can be difficult to achieve if the wrong technology is applied.

Our technology is widely used for creating stable nanoemulsions that can be sterile filtered – ideal when producing nab PTX/PXT.

How we can help

The process is linearly scalable from the lab to production.

We work with our customers to achieve the target particle size and distribution they need in their process and help them to scale up production.

Nanoparticle albumin bound (nab) technology is one of the most attractive delivery platforms, especially for some of the hard-to-deliver low aqueous solubility and high toxicity therapeutic agents such as chemotherapeutics.

One well known example is nab-paclitaxel, which was the first FDA approved, highly successful, chemotherapy drug which uses the nanoparticle albumin-bound method of drug delivery.

Nab-paclitaxel is used in the treatment of advanced and spreading pancreatic cancers, metastatic breast cancers and non-small lung cancers.

It is formulated by encapsulating the paclitaxel molecule inside the naturally occurring human protein albumin.  This avoids the traditional use of solvent based products which contributed to more severe patient side-effects.

The challenge is combining the paclitaxel and albumin and converting them into a suitable form for administering to patients.  Simply mixing the two together doesn’t work.  They need to be combined as a nanoemulsion.

See the Techniques tab to find out more.

Formulating nab paclitaxel as a nanoemulsion is a superior methodology that ensures the paclitaxel and albumin are combined correctly.

The active ingredient, which is the paclitaxel, is dissolved in an organic solvent to form an oil phase. This is then mixed with an aqueous phase – which is the albumin solution.  This produces a coarse emulsion which is then processed using high shear to create a nanoemulsion.

This high shear is delivered via Microfluidizer® technology, which produces the target droplet size with a mean particle size of 130 nanometers and a tight distribution.

The resulting nanoemulsion undergoes further processing to remove any traces of the organic solvent, it is then submitted to sterilization and lyophilization steps to create the final product in the form of powder.

We would recommend the M110P is used in lab-scale studies.  When scale up is required, we would advise using the 7250 Enhanced model which will produce the same results as seen in the lab, but in liters of volume. 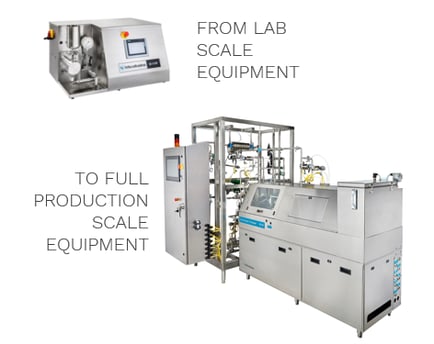 Our revolutionary Interaction Chamber™ system provides scalability so results can be repeated regardless of volume.  This technology ensures the same quality from lab to pilot scale to manufacturing. 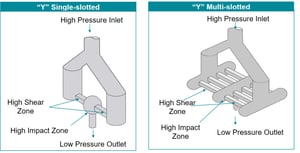 Our engineers, by working together with your formulation expertise, find the optimal solution in meeting your product goals.
Our experienced process and application engineers accelerate nanomaterials development, improve production efficiency, and train and educate personnel.
With a worldwide reputation and proven track record in creating best-in-class nanoemulsions, our dedicated and talented team has the expertise to help you achieve your target particle size and distribution curve.

Microfluidizer® technology has been proven time after time.

The manufacturing process is easily scaled up. Tests that can be run in the R&D lab using the M110P model can directly be scaled up to the M7250 Enhanced production-scale machine. 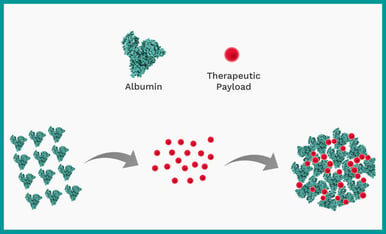 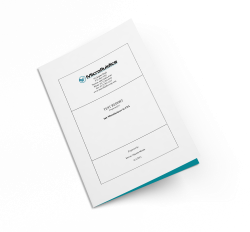 Dispersion report for an ink manufacturer: The deagglomerate and reduce the particle size of the dispersion to meet the customer's goals so that they can use these processing conditions on a scaleup Machine