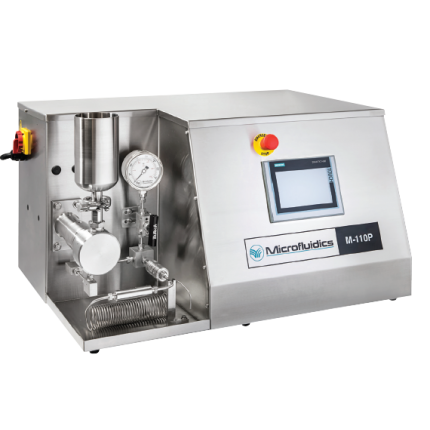 Although Microfluidizer® high shear fluid processors are technically high-pressure homogenizers, they share little in common with conventional homogenizers. Industries ranging from pharmaceuticals and biotechnology to cosmetics, nutraceuticals and food processing employ homogenizers during critical phases of processing and/or production.

Many companies within these industries have discovered they can streamline processing and production by investing in the Microfluidizer® homogenization process. Featuring a fundamentally different technology platform, Microfluidizer® processors generate uniform shear fields, which yield consistently repeatable, scalable particle size reductions. When you weigh the facts objectively, you’ll realize that when it comes to Microfluidizer® high shear fluid processors versus homogenizers, Microfluidizer® technology wins, hands down.

How Does a Microfluidizer® Processor Work?

The heart of this superior technology is our proprietary fixed-geometry Interaction Chamber™. This unique design ensures reliable particle size reductions, characterized by notably steep, narrow particle size distribution curves by having every microliter of material processed under the same conditions inside the fixed-geometry Interaction Chamber™. Even better, achieving these results often requires significantly fewer passes — and thus less time and energy. As such, Microfluidizer® products are eminently suitable for delicate processes ranging from the consistent generation of nanoscale particle size reductions to cell disruption. Ultimately, processing with a Microfluidizer® high shear processor, rather than a conventional homogenizer, results in significant savings.

The difference between conventional homogenizers and the Microfluidizer® processors can be summed up succinctly: Processing with a Microfluidizer® high shear processor yields significantly tighter particle size distributions, regardless of mean particle size. In this instance, smaller really is better. Smaller variability among final particles means more consistent results for your product.

Another factor contributing to the inherent superiority of Microfluidizer® technology is the relative consistency of the pressures involved. Conventional homogenizers generate wildly inconsistent pressures, typically achieving peak pressure less than 10 percent of the time during a given pass. In contrast, Microfluidizer® processors achieve and sustain peak pressure significantly longer. As the previous results demonstrate, this leads to significantly greater particle size reductions — using less energy and fewer passes, while taking less time. Time is money, as they say, and this axiom holds true during high-stakes particle size reduction operations.

Conventional homogenizers also tend to require more operator input due to the need for continual monitoring and constant adjustments during operation. This inferior technology is also more prone to problems such as shutting down due to overdraw of current (even when operating below maximum pressure).

Of course, frequent shutdowns can become costly, and damage may result when operators attempt to make up lost time by skipping cumbersome priming or proper startup procedures. These work-arounds can diminish the machine’s life and further negatively impact your bottom line.