The most effective way to prevent outbreaks of infectious diseases and save lives is through vaccination. Since their first introduction more than two centuries ago, vaccines have become the most efficient way to prevent pandemics.

Vaccine adjuvants are critical components in both human and veterinary vaccines due to their ability to greatly improve the vaccine efficiency by augmenting the immune response. Traditional adjuvants are based on aluminum salts, which are still widely used nowadays, and introduce humoral (Th2)-biased immune responses and are therefore not ideal for certain vaccines where cellular (Th1) immune response is more effective. Novel adjuvants using stable nanoemulsions have evolved as better alternatives due to several advantages compared to traditional adjuvants:

Despite the many advantages of using nanoemulsions as vaccine adjuvants or delivery systems, the pharmaceutical industry is facing major manufacturing challenges - how to achieve a precisely controlled particle size/size distributions, gain process scalability and repeatability, as well as meeting all cGMP regulations.

Nano-emulsions are kinetically stable, but their stability is mainly affected by a phenomenon called Ostwald ripening which arises from emulsion polydispersity and the difference in solubility between small and large droplets. The route of administration requires parenteral nano-emulsions to be sterilized. An effective and relatively simple sterilization method is filtration through 220nm sterilizing-grade filters, also known as terminal sterilization. If there is a large population of particles above 220nm, it will cause reduction in filter throughput which means increased filtration cost because more filters are needed. The filters can also clog which may lead to costly product losses. Therefore, both the particle size and size distribution are critically important.

Microfluidizer® technology is the ideal solution for producing best-in-class nanoemulsions. As shown in Figures 2 and 3, the basis of the technology is the fixed geometry Interaction Chamber™ which consists of micro-channel(s). The flow inside the Interaction Chamber™ is highly turbulent and the sample is exposed to superior shear, up to 108 s-1, which are orders of magnitude higher than those of comparable technologies needed to achieve the desired level of micro mixing. The microchannel also comes with shapes and sizes to provide tuneable shear rate. The constant pressure pumping technology allows the system to accommodate materials with high solid content, high viscosities, as well as a wide range of temperatures and operate under either batch mode or continuous mode. Product temperatures can be effectively controlled via cooling devices such as heat exchangers. 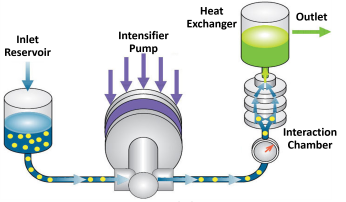 When producing nanoemulsions with a Y-Chamber, fluid is split into two streams at the inlet and each passes through the micro-channel or micro-channels, subjecting the liquid to high shear forces, and subsequently impinging on each other inside the high impact zone to create micro mixing due to intense turbulent energy dissipation. The shear and micro mixing help break the droplets into nanometer range. Multi-slotted scale-up Interaction Chamber™ designs, as shown below, implement a parallel array of identical micro channels to ensure linear scalability to tens of liters per minute because fluids inside each microchannel will be subjected to exactly the same shear rate and generate the same level of micro mixing. 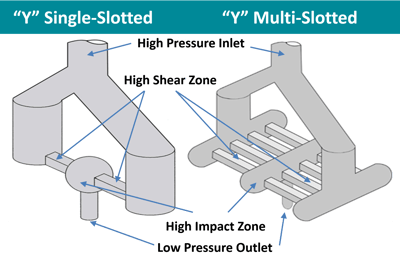 The combination of intensifier pump and fixed geometry Interaction Chamber™ provides a major advantage: the delivery of a constant process pressure profile. The process pressure of the Microfluidizer® processor remains constantly at the target pressure for the majority of the compression strokes as shown in the chart below, which means the entire product is processed through the Microfluidizer® processor at the target pressure.

The result is a nanoemulsion with a smaller particle size and narrow size distribution. Note that the final product quality is not affected during the suction stroke, which is represented by the zero-pressure portion, since no materials are pushed and processed through the Interaction Chamber™ during this period. On the other hand, conventional High Pressure Homogenizers (HPH) are designed to deliver constant volume instead of pressure. Therefore, their typical pressure profile is continuously varying throughout the entire cycle due to the movement of the homogenizing valve, as shown below, which can drop as much as 50 percent from the target pressure. The emulsion obtained with the HPH usually carries large particles and broad size distribution as a result of such large pressure fluctuations.

A case study is presented here to illustrate the advantages of the Microfluidizer® technology in producing nanoemulsion adjuvants. In this study, a Microfluidizer® processor is used to produce a model oil-in-water nanoemulsion adjuvant and compared to the results achieved with traditional HPH technology. The model oil-in-water nanoemulsion was a squalane oil based emulsion and prepared by formulating separate oil and aqueous phases first and then mixing with a low-energy rotor-stator mixer (Quadro HV0) to generate the pre-emulsion for both emulsification methods. Final nanoemulsions were created by a Microfluidizer® processor (M110P) and an HPH. During processing, parameters such as pressure and number of passes through each processor were varied and investigated. The particle size and size distribution were analyzed using a dynamic light scattering instrument and an optical microscope. 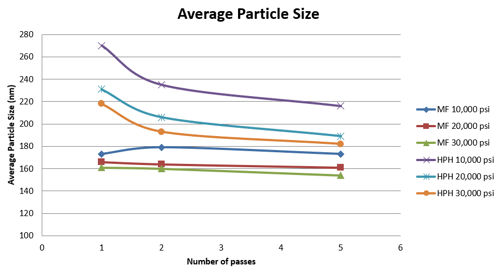 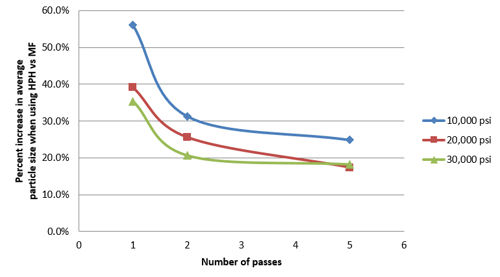 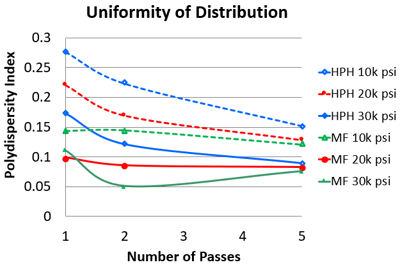 Figure 8 shows the repeatability results with the average particle size of nanoemulsions obtained from 3 separate runs by each method under the identical process pressure of 30kpsi. The particle size standard deviations of the nanoemulsions were much lower when produced by the Microfluidizer® processor (0.1–2.6) compared to the High Pressure Homogenizer (3.8–14.8). 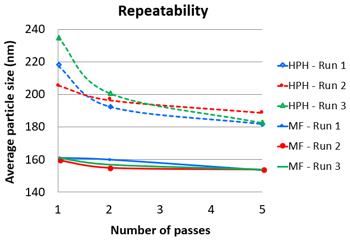 The results observed of particle size and size distributions, power consumption and process repeatability all proved that the Microfluidizer® technology is more effective than traditional HPH technology in producing nanoemulsions.

The additional benefit of this superior nanoemulsion production is that of further advantages in improved stability and more efficient sterile filtration processes.

To learn more about the equipment and technology used for Vaccine Development please visit our resources page.

Posted by Matt Baumber
Find me on:
LinkedIn Twitter

Blog articles direct to your inbox

For the latest news, insight and updates.

Since 2011, Microfluidics has been a member of the IDEX Corporation family of companies. IDEX is a global leader in highly engineered systems and components.