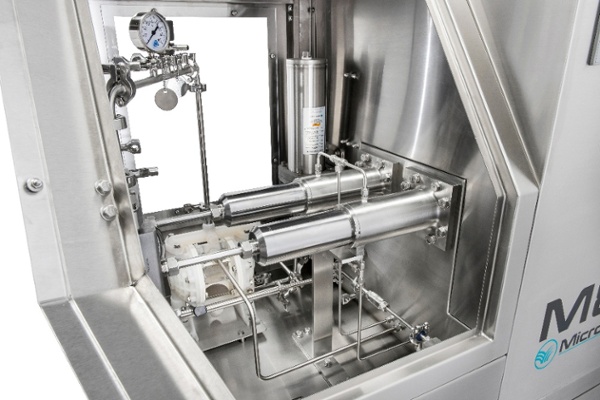 Emulsions are effective vehicles for the delivery of bioactive compounds. Accordingly, these microscopic mixtures of droplets composed of otherwise immiscible liquids are of great importance to industries such as pharmaceuticals, cosmetics and food. The challenge for process engineers within these industries is to create suitably stable emulsions in the most efficient manner possible. In most instances, droplet sizes of 1 μm or less are required to achieve an appropriate balance between stability and bioavailability.

Emulsions in the Age of Nanotechnology

These days, more and more manufacturers are pursuing the creation of nanoemulsions, which are characterized by particles in the vanishingly small range of 50-200 nm. At this size, particles become transparent or translucent, essentially disappearing to the naked eye. This offers certain obvious advantages: When applied to the skin, for example, a nanoemulsion may appear all but invisible; a characteristic that is valued as aesthetically pleasing among consumers. At the same time, a nanoemulsion’s infinitesimally small particles more readily penetrate the upper layers of the epidermis to more effectively deliver bioactive molecules to their cellular targets.

Of course, achieving sufficient droplet disruption to create nanoemulsions requires a significant input of energy. Two effective methods have emerged: high-pressure homogenization through either Microfluidizer® technology or high-pressure valve homogenization (HPVH). In both instances, shear forces account for oil droplet disruption suitable to form fine emulsions. However, the physiochemical properties of the emulsions formed by these competing methods may vary widely.

The question becomes: Which method produces smaller particles, more stable emulsions, and generates less heat energy? Nanoemulsions are inherently thermodynamically unstable, so the use of a suitable emulsifier is also a factor that can determine success or failure. As noted in a 2010 article in the “Journal of Dispersion Science and Technology,” researchers at China Agricultural University in Beijing set out to determine the physiochemical properties of β-carotene nanoemulsions created using these two homogenization technologies, in combination with various candidate emulsifiers.

Their experiments showed that up to 99 percent of the energy used to create a nanoemulsion through high-pressure homogenization is converted to heat. This, of course, tends to raise the temperature of the emulsion. Properties such as viscosity, droplet size and, ultimately, stability, are all reliant on temperature. Thus, temperature control is crucial during the nanoemulsification process. The Chinese researchers showed that the M110-EH Microfluidizer® processor, obtained from Microfluidics, yielded considerably smaller temperature increases than the HPVH machinery.

Essentially, in several tests, under various pressure and other conditions, the Microfluidizer® processor produced smaller β-carotene containing droplet sizes. The researchers noted “… emulsions through Microfluidizer® technology had much smaller droplet sizes compared with those through HPVH under the same homogenization conditions.”

For more information about our groundbreaking Microfluidizer® technology: Call, contact us here or request a quote.