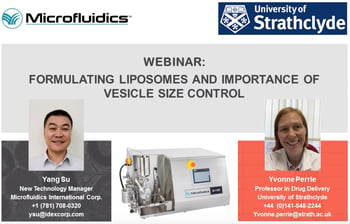 Liposomes are amongst the most established particulate-based drug delivery systems and they can be used to deliver a wide range of drugs, genes and vaccines. Through appropriate selection of lipids and preparation methods, liposomes can be tailored to accommodate a variety of drugs, and can be optimised in a range of characteristics including: size, charge, bilayer rigidity, surface characteristics, drug retention and controlled drug release.

The parenteral route is the most commonly adopted in clinical use. Intravenously injected liposomes interact with blood opsonins and are removal from the blood circulation by the mononuclear phagocyte system, mostly by fixed macrophages in the liver and spleen. This rate of clearance is dependent on vesicle size, lipid composition and surface charge. When administered via the intramuscular or subcutaneous routes, liposomes tend to enter the lymphatic system including the lymph nodes draining the injected site. This may be advantageous in vaccine design. However again, one of the key factors controlling the fate of liposomes administered via this route is their vesicle size.

Via this Webinar we will investigate the impact of liposome size and formulation on their biodistribution and discuss the importance of vesicle size control in liposome formulation and manufacture.

Dr Perrie currently holds the post of Professor in Drug Delivery within the Strathclyde Institute of Pharmacy and Biomedical Sciences, University of Strathclyde, Glasgow, Scotland. Her multi-disciplinary research focuses on the development of drug delivery systems to facilitate the delivery of drugs and vaccines, thus providing practical solutions to current healthcare problems.

She earned a PhD from the University of London, working on “Investigating the role of liposomes for drug delivery”, and later worked at Lipoxen Technologies Ltd, where she developed liposome drug delivery platform technology.

Dr Perrie joined Aston University in 2000 and was appointed Professor in Drug Delivery in 2007. Her work has been published 120 peer-reviewed manuscripts and 5 textbooks.

Once you click 'download' below you will be redirected to a page where you can save the .pdf